Described as “the next pandemic,” the issue of antimicrobial resistance (AMR), or drug-resistant infections, is becoming increasingly urgent. How can we ensure a pipeline of new drugs to combat infectious disease in the short term while preparing for long-term solutions? Task force research includes antibiotic resistance, antibiotic discovery, antibiotic alternatives, point-of-care diagnostics, other anti-infectives and barriers to AMR mitigation.

Over the past 10 years, the number of students pursuing postsecondary education and receiving a STEM credential from a Canadian public postsecondary institution has steadily increased. Yet, there remain significant racial, ethnic, and gender gaps in students enrolled in STEM degree programs and who occupy STEM-related jobs in the workforce. The Biochemistry and Biomedical Science Department, M.G. DeGroote Institute for Infectious Disease Research, and Global Nexus are committed to inclusive excellence and creating opportunities for students underrepresented in STEM. Our mission is to engage, encourage, and assist students from equity-deserving groups to pursue biomedical research and careers in biomedical sciences.

We aim to support students that face barriers to engaging in academic research, as well as those who have not had opportunities to explore STEM-related career paths in their educational journey. This program supports them in their current academic program and future careers. No previous research experience or research project proposals are required. Highly motivated, passionate, and enthusiastic STEM students are strongly encouraged to apply.

The program is open to students who live in Ontario (residents) and who are enrolled in a STEM postsecondary degree/diploma program and who self-identify as any of the following:

Students will be paid a stipend of $7,000 for the 12-week period (35 hours of work per week is expected) and provided with a meal card for dining on and off campus (valued at $900).

Other support available to successful applicants include (where applicable):

Successful applicants will have the opportunity to engage in research in areas including (but not limited to):

Successful applicants will be matched by the Steering Committee team based on faculty availability and mutual research interests.

Both sections of the application must be submitted by 11:59 PM on Monday, February 14th, 2022. Only fully completed applications (online form and one letter of support) will be assessed by the Selection Committee. Finalists may be invited for an interview.

LEARN MORE ABOUT THE PROGRAM

The Summer Scholars Program (SSP) is a collaboration between the Department of Biochemistry and Biomedical Science, the Michael G. DeGroote Institute for Infectious Disease Research, and the Global Nexus for Pandemics and Biological Threats. 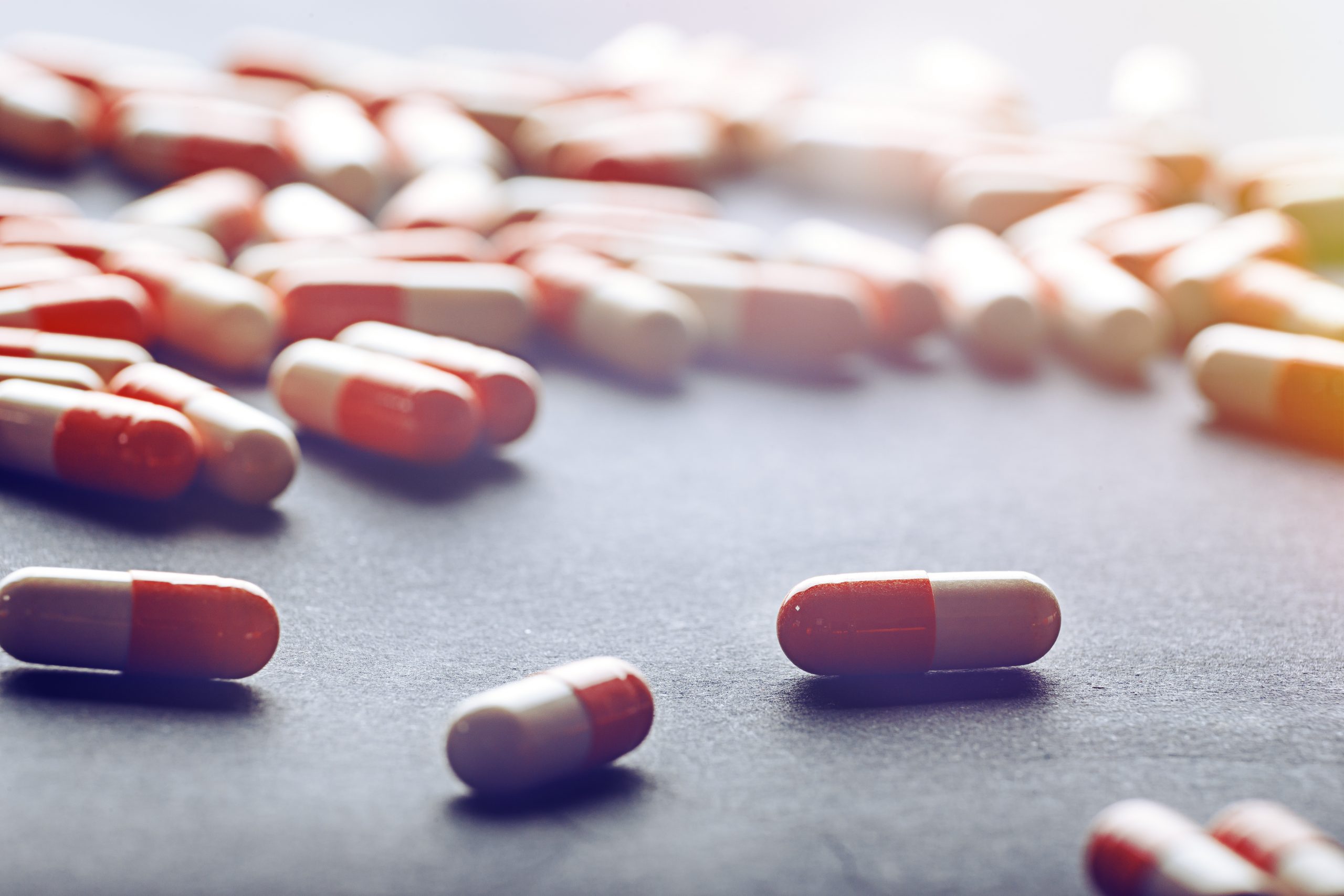 Research: Streptomyces bacteria are best known for their ability to produce a wide range of bioactive compounds, including antifungals, anticancer drugs, and over 70% of the antibiotics in clinical use today. However, although we know that these bacteria have the capacity to produce far greater numbers and types of antibiotics, accessing their potential is especially dif?cult to do in the lab.

With the goal of both increasing the production of antibiotics and discovering new ones, Elliot developed an innovative way to exploit the antibiotic-producing abilities of Streptomyces.

Elliot’s research group anticipates that their various developments will be highly successful in yielding entirely new antibiotics and other natural products of medicinal value. As such, this powerful project has the potential to significantly help fill gaps in the current antibiotic discovery void. 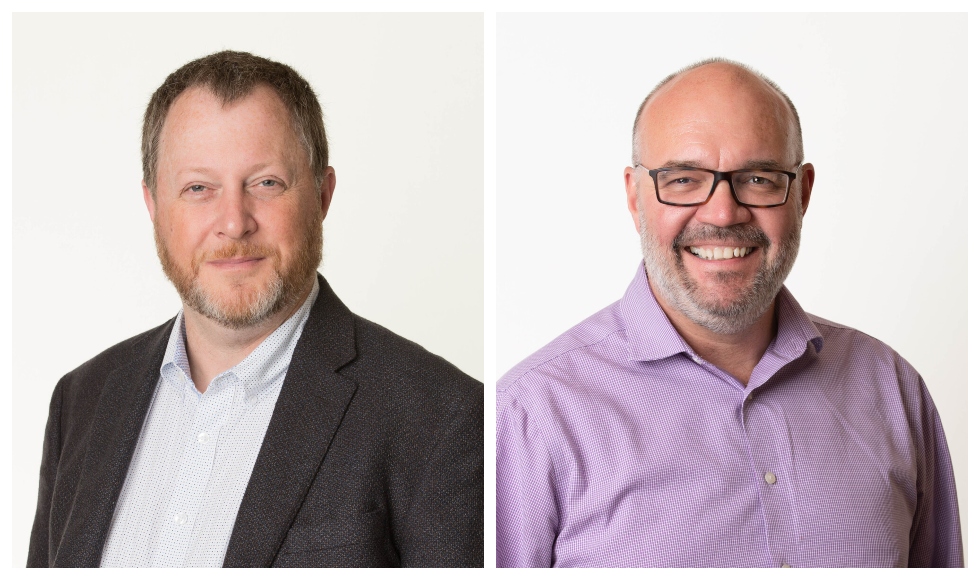 A rigorously curated collection of resistance genes, their products, and their associated phenotypes, CARD is aimed at supporting antimicrobial resistance surveillance through the detection, curation, and analysis of resistance elements.

Description: The emergence of “superbugs” – microbes that are resistant to many, and sometimes all, of our available antimicrobials – has resulted in a growing health care crisis. From both Canadian and global perspectives, it is therefore essential that we know which antimicrobial resistance genes are prevalent, which genes are moving around, and which pose a threat. One of the best resources supporting AMR surveillance in Canada is the Comprehensive Antibiotic Resistance Database (CARD), as demonstrated by the current global distribution of users.

The CARD database is a biological database that collects and organizes reference information on antimicrobial resistance genes, proteins, and phenotypes. The database covers all types of drug classes and resistance mechanisms and structures its data based on an ontology. The CARD database was one of the first resources that covered antimicrobial resistance genes and is the superior bioinformatic resource in the field as evidenced by wide adoption across the globe in academic, government, and clinical labs. A unique feature of CARD is a search engine called the Resistance Gene Identifier, which takes genomic sequence data and identifies all known resistance genes present in the dataset.

The CARD allows users across the globe find potential antibiotic resistance genes in newly sequenced genomes, making it transformative on a national and international level. A February 2016 Genome Canada – Canadian Food Inspection Agency (CFIA) Forum on Genomics and Antimicrobial Resistance identified the CARD as an important national resource and noted it as one of a few uniquely Canadian strengths in AMR surveillance. These strengths are not restricted to the academic and public health domains, as the data created within CARD has industrial value for drug discovery, point-of-care diagnostic development, and epidemiological applications. 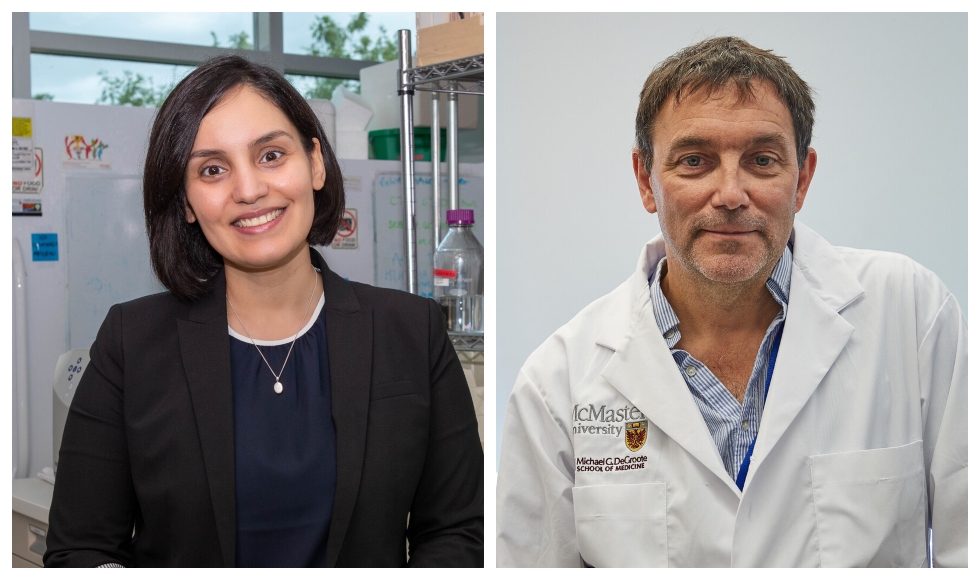 Getting the 'drug to the bug' Learn More

Getting the 'drug to the bug'

Research: Successfully delivering antibiotics to the actual site of infection can be impossible. Infections caused by bacteria that form biofilms – slime-like and frequently drug-resistant structures that strongly attach to surfaces – are especially challenging to treat.

Zeinab Housseini-Doust and Michael Surette are combining their unique strengths in biochemical engineering and bacterial biology, respectively to develop an interdisciplinary strategy that can deliver antimicrobial compounds directly to the site of infections caused by biofilm-producing bacteria.

The team’s “smart delivery system” distributes microscopic molecules called nanoparticles precisely to the site of infection, where an interaction with the targeted disease-causing bacteria causes them to locally release concentrations of an antibacterial agent. This response provides greater toxicity to the infecting bacteria and less damage to the surrounding “good” bacteria, increasing the effectiveness of the treatment while reducing both the negative consequences of antibiotics and the potential emergence of antibiotic resistance. 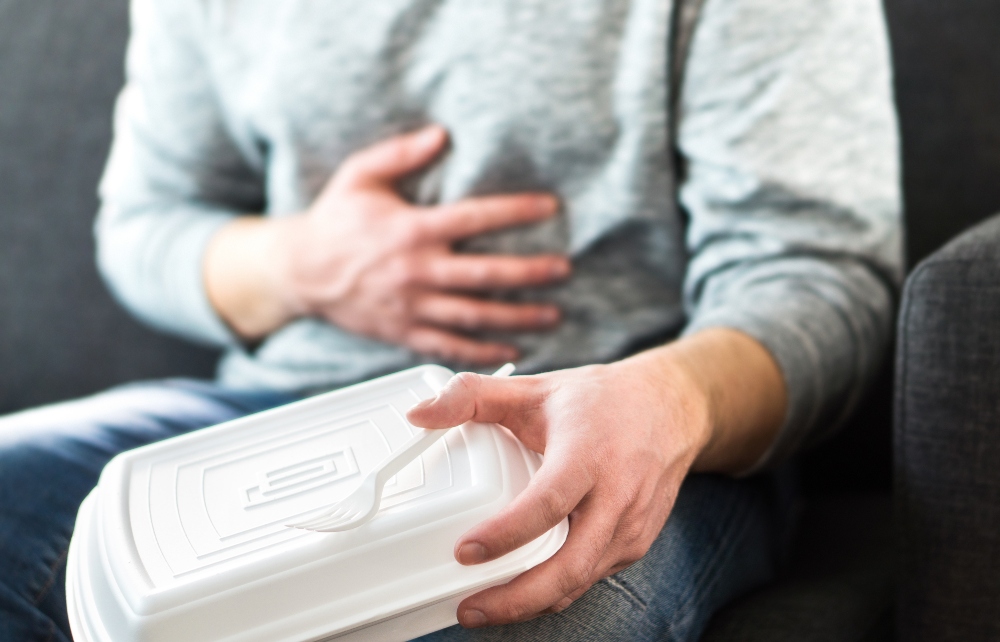 Research: Salmonella is a common cause of foodborne illness, resulting in thousands of serious and often life-threatening infections in Canada each year. These infections are especially difficult to treat, as Salmonella can invade and reside within human white blood cells where they are better protected from components of the immune system and numerous mainstay antibiotics.

Coombes and Brown developed a novel screening technique to explore how to clear Salmonella infections from inside human cells. First, the team identified several genes within Salmonella that are essential for growth and survival. They then screened a collection of approximately 1,600 previously approved drugs against Salmonella to find anti-bacterials that could halt these genes when the bacteria were hidden inside cells called macrophages.

Among the several compounds found to have the desired inhibitory activity, one molecule called metergoline was found to be the most potent in killing Salmonella within macrophages. Metergoline was further studied in a series of animal experiments, in which it was found to reduce the amount of Salmonella in mice and prevent or delay lethal infection. This exciting research was published in the prestigious journal Nature Communications and has been shared across North America at numerous scientific conferences. Today, the team is performing additional studies to identify even more compounds that can inhibit the virulence functions of Salmonella. 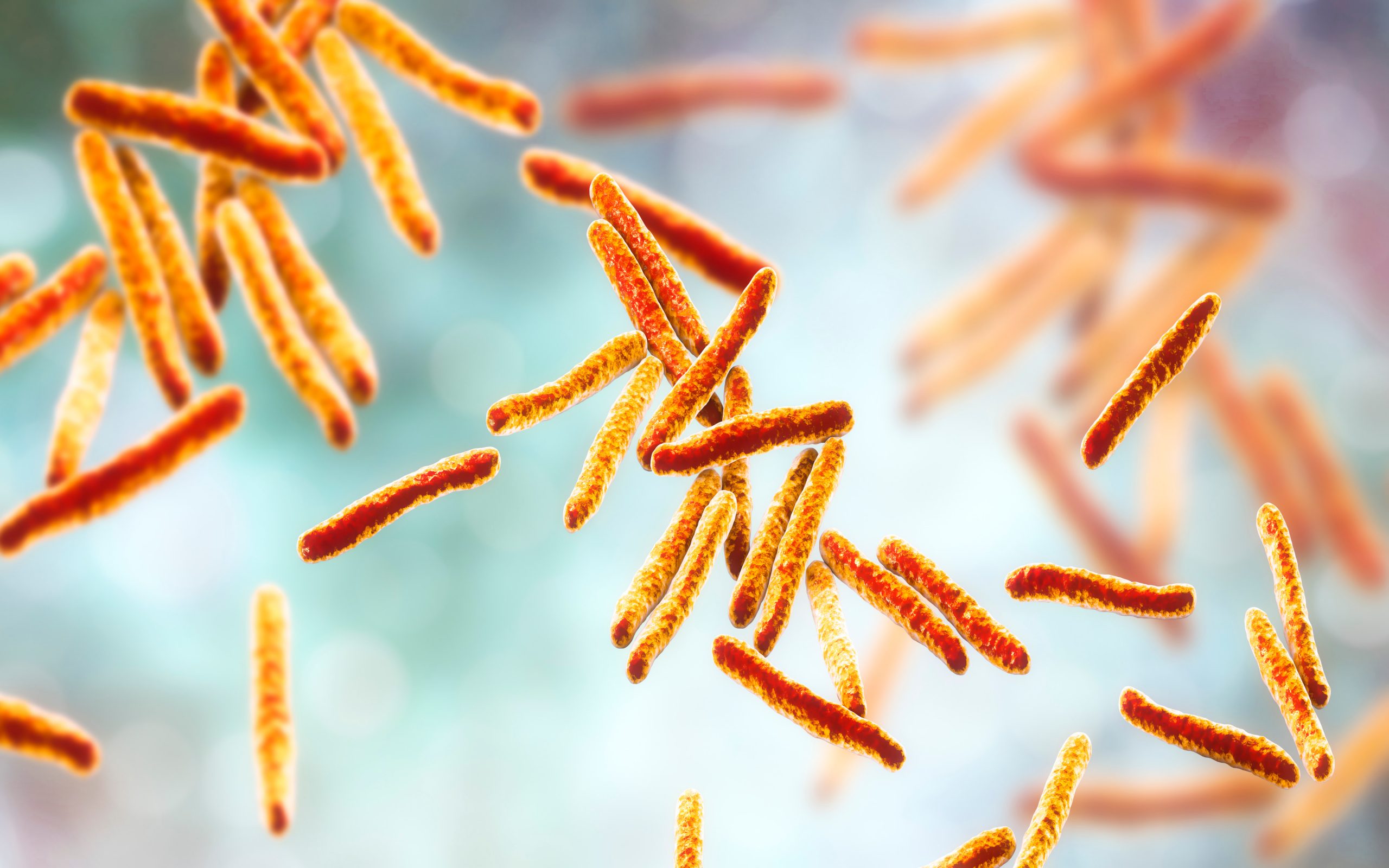 Microbiologist Lori Burrows and her team are developing a more effective vaccine for tuberculosis.

Research: Over a third of the world’s population is infected with tuberculosis (TB), with over 10 million new cases arising each year. Yet, despite the vast global devastation of TB, current prevention strategies are not effective. Moreover, the rapid increase of antibiotic resistance is making this disease even harder to treat.

TB is caused by a deadly bacterium called Mycobacterium tuberculosis (Mtb). Studies in Burrows’ lab showed that a less dangerous, unrelated bacterium called Pseudomonas made sugars that were identical to those found within the cell walls of Mtb. When the team injected rabbits with these sugars, the animals produced special antibodies that have been shown to help the immune system kill Mtb bacteria in humans. Her discovery suggested that the sugars of Pseudomonas could be powerful components to include within a TB vaccine.

Pseudomonas bacteria are quicker to grow and much safer to work within the lab than Mtb, and the sugars are easier to extract. As such, the team can more efficiently isolate them to induce the creation of helpful antibodies. The team is now performing essential, higher-risk animal tests that will allow them to test the efficacy of their formulation both alone and in combination with a different type of TB vaccine being developed at McMaster.

Recent study results reveal the extraordinary promise of these sugars as potential drug and vaccine targets for TB. Further, the success of their study allowed them to expand their research from its original proposal to aid in a project aimed at developing diagnostic tests to detect TB more rapidly in patients. 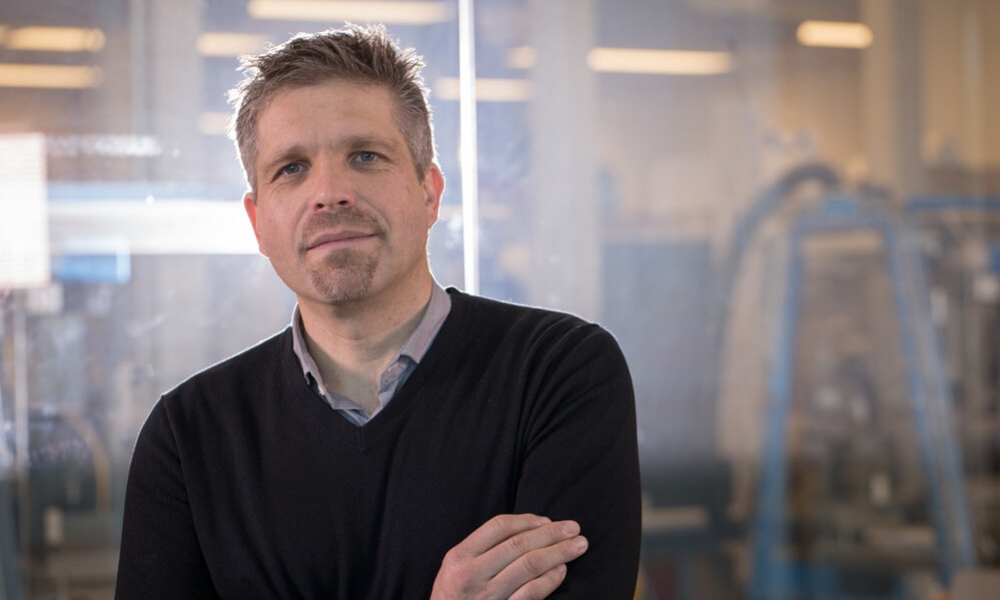 Renowned researcher Hendrick Poinar is creating a bioinformatics tool that can quickly and efficiently identify sepsis.

Research: Sepsis is a dangerous, life-threatening illness that occurs when the body’s immune system goes into overdrive in response to an infection. Current sepsis detection and treatment methods are highly underdeveloped and unreliable, allowing the disease to remain a significant problem to global health. Furthermore, sepsis is leading to increased antimicrobial resistance in susceptible patients, creating a large demand for point-of-care detection methods.

Poinar’s team is developing a way to more rapidly and efficiently identify the microbial species that cause sepsis and their associated drug-resistant profiles. Using a unique molecular method called “bait-capture”, Poinar’s team can quickly detect pathogens that are present in the blood and extract the resistance genes they may carry. These genes are then analyzed and organized into a library of resistant elements, creating a sophisticated surveillance network that can be used to track which resistance genes exist, which ones are moving around, and which ones are most likely to cause serious threats in patients and the community at large. The in-lab methodology, coupled with an accessible bioinformatics tool, will aid in the rapid recovery of patients by suggesting the best antibiotic for treatment. This, in turn, will help to reduce the potential for antimicrobial resistance.

The results obtained by Poinar’s team to date show the significant potential of this product as a valuable epidemiological resource.